To use HTTP/2 Push effectively, servers need to know well what is not necessary to Push. Cache digests provide the necessary information to make that possible.

We often get the question of how expensive is to use HTTP/2 Push, server-wise. Answer: there is no reason for it to be more expensive than not using it. In fact, whenever we use it, it improves website speed and reduces web server load. The key ingredient of this secret sauce is cache digests. The technique was first implemented by Kazuho Oku in his H2O server, and then published by him and Mark Nottingham as an Internet draft. We followed suite with our own implementation, and we like very much the results.

HTTP/2 Push allows websites to save loading time by skipping network round-trips. Because it reduces the effects of latency so well, it may become a viable alternative to CDNs for websites with moderate traffic. But in order to save resources when doing HTTP/2 Push, a web server should know which assets the browser already has in its cache.

Our favorite solution to this problem is cache digests (we have an implementation active by default in ShimmerCat Accelerator). We start by explaining how it works in general, and then take a look to the alternatives, together with their respective drawbacks. 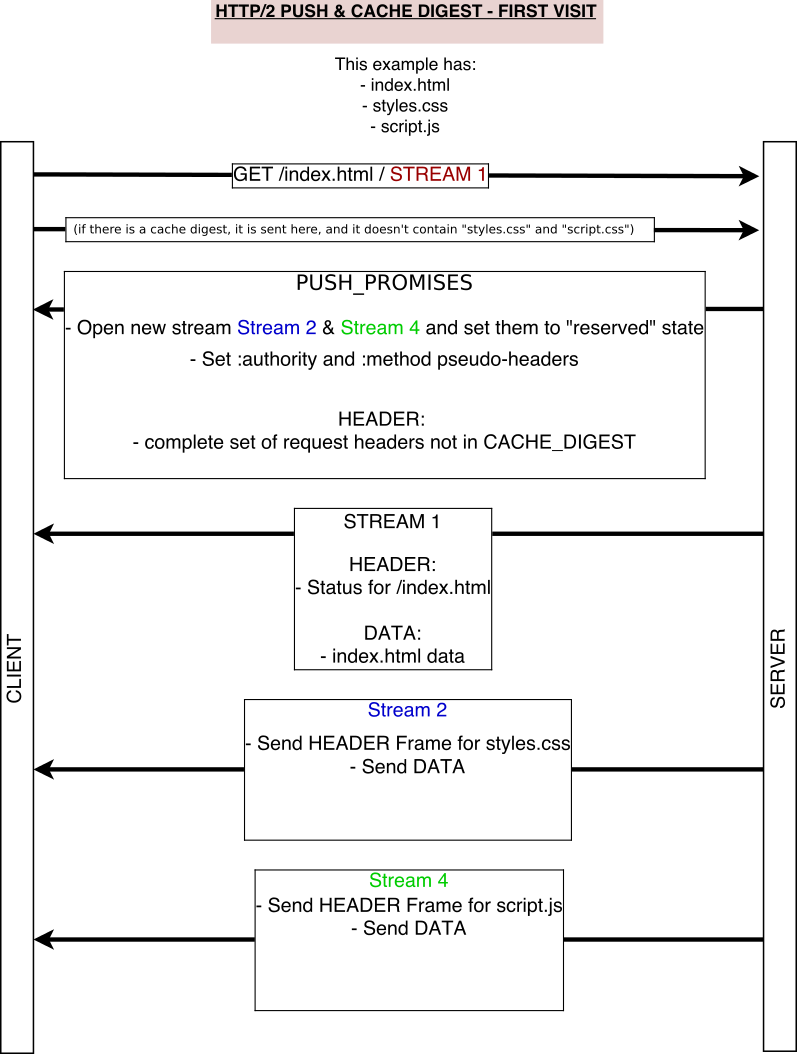 The solution to the problem above comes by having the browser and server trade information. Colloquially, the browser tells very early to the server “I already have this and that asset”, so that the server knows that it doesn’t need to push them.

The idea is really straightforward, but as they say, the devil is on the details. The first question worth answering is how to identify, that is, how to give a name, to the assets that the browser has. Well, that was solved ages ago, you may say, URLs are used to identify assets.

Uncompressed digests are too big¶

Indeed, URLs can be used as the underlying information in that first message that the browser sends to the server. The digest then says “I already have this URL and that other URL”. The only issue with URLs is that they are long, having an average length easily over 60 bytes.

We have discussed before that there is an average of 86 requests per page, but many of them are to external services. Of the remaining, many are not in the critical rendering path and therefore don’t need to be included in a push list. Therefore we can take 30 or 40 as a relatively high number of assets to push. We allow for this high number because with HTTP/2 there is no need to bundle assets.

Now we can estimate the size of an uncompressed URLs cache digest. Let’s say that we are interested in only pushing assets which are considered fundamental to a web page, but consider that most sites are made of multiple pages, and that each page has a chance to contribute some new assets to a digest. How many bytes would be required by all URLs that a user has fetched from a server, by the time the user has visited the fifth page?

To give you a more precise number, this page where you are reading this article shares around 30 assets with other pages in the site, and the average number of new assets (say, a new Javascript file with some article-specific functionality) per visited page is around 0.7. So, if we were to use URLs, we would be using 60 x (30 + 5 x 0.5) bytes per cache digest, which is close to 2 kilobytes.

Complicating the situation is the fact that assets in websites evolve: many website owners update the assets that make a page frequently. For ultimate performance, each combination of asset and asset version will receive a unique URL via cache busting. Since the browser can’t possibly know if there is a new version of the asset when sending the cache digest, all versions must be sent as well.

Can compression help? Yes of course. To my knowledge, the most effective method of compression for this particular problem has been devised by Kazuho Oku and Mark Nottingham, and has been published as an Internet Draft.

Let’s recapitulate: at the beginning of a browser and server message exchange, the browser wants to send the message “I already have this URL and that other URL”. But sending those URLs literally can take a lot of space. Therefore, we want to compress them.

K. Oku and M. Nottingham thought to use Rice encoding to compress the sets. An overview follows:

You can read the particulars of this encoding scheme in the Internet Draft linked above, and for the general mathematical technique you can read the Wikipedia article.

In any case, the result of the process is a digest string where there is a very small number of bits for each of the original URLs. The number of bits range from 5 to 15 in typical cases, which is less than two bytes.

The small size of the cache digest is achieved because the compression is lossy, that is, the original URLs can’t be reconstructed from the digest string (compare with the situation in the previous subsection). Instead, the server can take one of the URLs that it intends to push, compute its hash and see if it is included in the digest sent from the browser. This last test is also lossy, since there is a chance that two different URLs end up with the same truncated hash. In such situations, the server will wrongly assume that the browser already has the resource, in what is called a false positive.

False positives are not a big deal, it just means that the browser will get to request an asset that it doesn’t have instead of having the asset pushed. That’s the “normal” way of doing things on the web. Also note that for false positives to happen the browser needs to have already some of the assets from the site in its cache, so the performance hit would be small.

Cache digests have some CPU and I/O cost, but they could be slightly more efficient than the traditional approach.

By contrast, a digest is a relatively short string encompassing a large group of assets. Once received by the server, this string is decompressed to a set of numbers. Algorithms operating on numbers tend to use less memory than URL normalization and string comparison algorithms. Which in turn improves CPU cache performance. The numbers themselves are derived from cryptographic hashes of the URLs, but those hashes can be computed once and saved forever.

Beyond these theoretical considerations, we have observed that ShimmerCat Accelerator effectively performs better when using cache digests and pushing sets of assets vs receiving and responding to a large set of conditional requests. But this could be an implementation detail.

Although there may be more sound ways of solving the problem of knowing which assets the browser already has, so far we haven’t been able to find one that works so well in as many scenarios as Rice encoding of URL sets do. Here we discuss some of the variations and why they are not so good.

The idea behind bitsets is to assign to each asset a unique, small identification number. That number can be used to index a bitmap in the cache digest. If the browser has an asset, there is a one for that bit position, otherwise, a zero.

Pros about this approach: it is very easy to implement.

Cons: we need a new identifier for each new asset, including different versions of the same one. There is no clear way to re-use those identifiers. This may be acceptable for really small websites, but it doesn’t scale well. Just think on a small personal blog whose author is tweaking frequently the main CSS file: each version may require a new identifier, and a new bit.

We are talking about versions. What if the digest is just a version number? Then when a request comes, the server can compare the version number present in the digest with the current version of the site, and only push assets that have changed between the two versions.

This approach could certainly solve the issue with versions. But most websites have different sets of assets to push. For example, we have different CSS for the front-page and for the rest of the pages in the site. Since the server needs to know which sets of assets the browser has, the cache digest should also contain a set of sets of assets. This representation is at least as complicated as Rice encoding, with the drawback of requiring set expansions and set difference computations on the server, plus keeping a repository of versions.

When a browser considers a resource fresh, it resets any pushed streams for that asset. This behavior has a drawback: we need to keep using cache busting. But it does save some resources in the server by telling it that a pushed stream is not needed.

Unfortunately, the stream reset may reach the server after it has already commited some resources to the push, since typical round-trip times are well over 100ms (we have some published data on this, but more is coming). During this time, the server may dedicate resources to pushing assets which are not going to be used anyway. In its current version, ShimmerCat Accelerator sends all the data of the main stream, e.g., the index.html file before pushing any streams. That is, we send first the push promises, then header and data of the principal stream, and finally response headers and data of the pushed streams. No resources are committed to the pushed streams until the data of the main stream is sent, so that there is a bit more of time to receive and process a stream reset.

The intention of this article was to introduce the idea of cache digests to web developers. To keep it light and general, and because there are not yet any standards, we have omitted many technical details from this article.

The Internet Draft could introduce an extra HTTP/2 frame for cache digests. I particularly dislike this prospect of moving information related to HTTP caching away from HTTP headers, but we suspect that the HTTP intermediary industry has good reasons.

In any case, since the introduction of HTTP/2, people have been dicussing ideas for cache digests, and many interesting viewpoints are coming up all the time. What is your take?